Along with Devi Stuart-Fox, Indraneil Das and Terry Ord, I recently published a paper in Biology Letters showing that arboreal Draco sumatranus lizards orient themselves on the tree trunk perpendicular to the position of the sun during broadcast signalling. This presumably increases the radiance of the translucent dewlap, and likely it’s conspicuousness.

Draco lizards are ecologically analogous to the anoles and share similar signalling behaviour (see this recent Draco clip from the BBC’s Planet Earth II). They too possess extendable dewlaps that differ in colour and size between sex / species groups, and they also live in many different habitat types throughout Southeast Asia. I’ve written about my Draco research on Anole Annals before, here and here, if you’re interested – I hope they’re now well accepted as honorary anoles!

Like the anoles, the skin of the dewlap for many Draco species is stretched thin when extended and allows light to pass through. Leo Fleishman published a Functional Ecology paper in 2015 measuring how the dewlap of Anolis lineatopis appears to glow when positioned with the sun behind them, and how this might improve signalling efficacy. Contrary to expectation, they found the transmission of light through the dewlap doesn’t improve the luminance contrast of the dewlap against the background. The radiance of the dewlap is increased by light transmission (radiance is the sum of the light reflected by the dewlap and any transmitted through the dewlap) – but patches of high radiance are very common in Anolis lineatopis forest shade environment, due to many the little shafts of light shining between gaps in the leaves. Instead they showed that due to the higher total intensity of the dewlap colour (thanks to light transmission) it’s probably easier for a conspecific to discriminate the signal from the natural background colours.

Given this and the similarity between anole and Draco dewlaps, I wondered whether Draco lizards might behaviourally adapt their position on the trunk relative to the position of the sun, to maximise the exposure of the extended dewlap to sunlight. To look at this, I just observed the position of the lizard relative to the sun upon first sighting, and noted whether the lizard was displaying, and if so, whether was it directly to a neighbouring conspecific, or whether it was a territorial broadcast display. We found males were significantly more likely to be oriented perpendicular to the sun when displaying, but not when not displaying (fig. 1).

Of course, signals intended for specific individuals in close-range encounters require the signaller to position themselves such that the receiver is in line of sight – but Draco lizards (and anoles) also give these ‘broadcast signals’ which are not intended for any specific individual, but just as territorial display. For these signals, where there is not another lizard around, they seem to orient themselves perpendicular to the sun, so their extended dewlap is exposed to the most light.

Female D. sumatranus also have dewlaps, but they are small in size and females only very occasionally engage in broadcast display. I had not expected to see this orientation behaviour in females, as their dewlaps appear opaque and so don’t benefit from light transmission. However, I found the same orientation pattern for females as for males: perpendicular to the sun when displaying, but not when not displaying. This is perhaps because their dewlap reflects UV light (fig. 2) and direct sunlight is richer in UV and shorter wavelengths than light reflected off objects in the surrounding scene. Males have yellow dewlaps, and they too reflect a little UV (though much less than females). Of course, the transmission of light is unidirectional and only increases the radiance of the dewlap for those viewing the dewlap from the opposite side to that of illumination, so the benefit of direct sunlight hitting the UV/yellow male dewlap likely plays a role in this orientation behaviour for males as well. 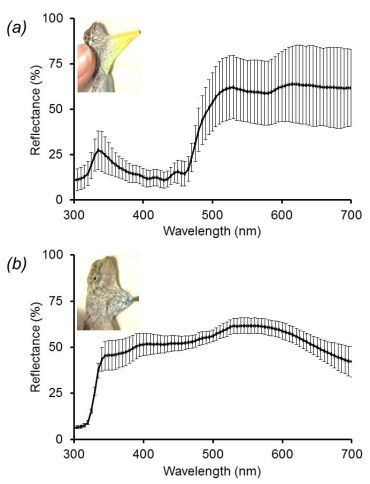 View all posts by dklomp